RNA-seq experiments are performed with an aim to comprehend transcriptomic changes in organisms in response to a certain treatment. They are also designed to understand the cause and/or effect of a mutation by measuring the resulting gene expression changes. Thanks to some robust algorithms specifically designed to map short stretches of nucleotide sequences to a genome while being aware of the process of RNA splicing has led to many advances in RNAseq analysis. The overview of RNA-seq analysis is summarized in Fig1. 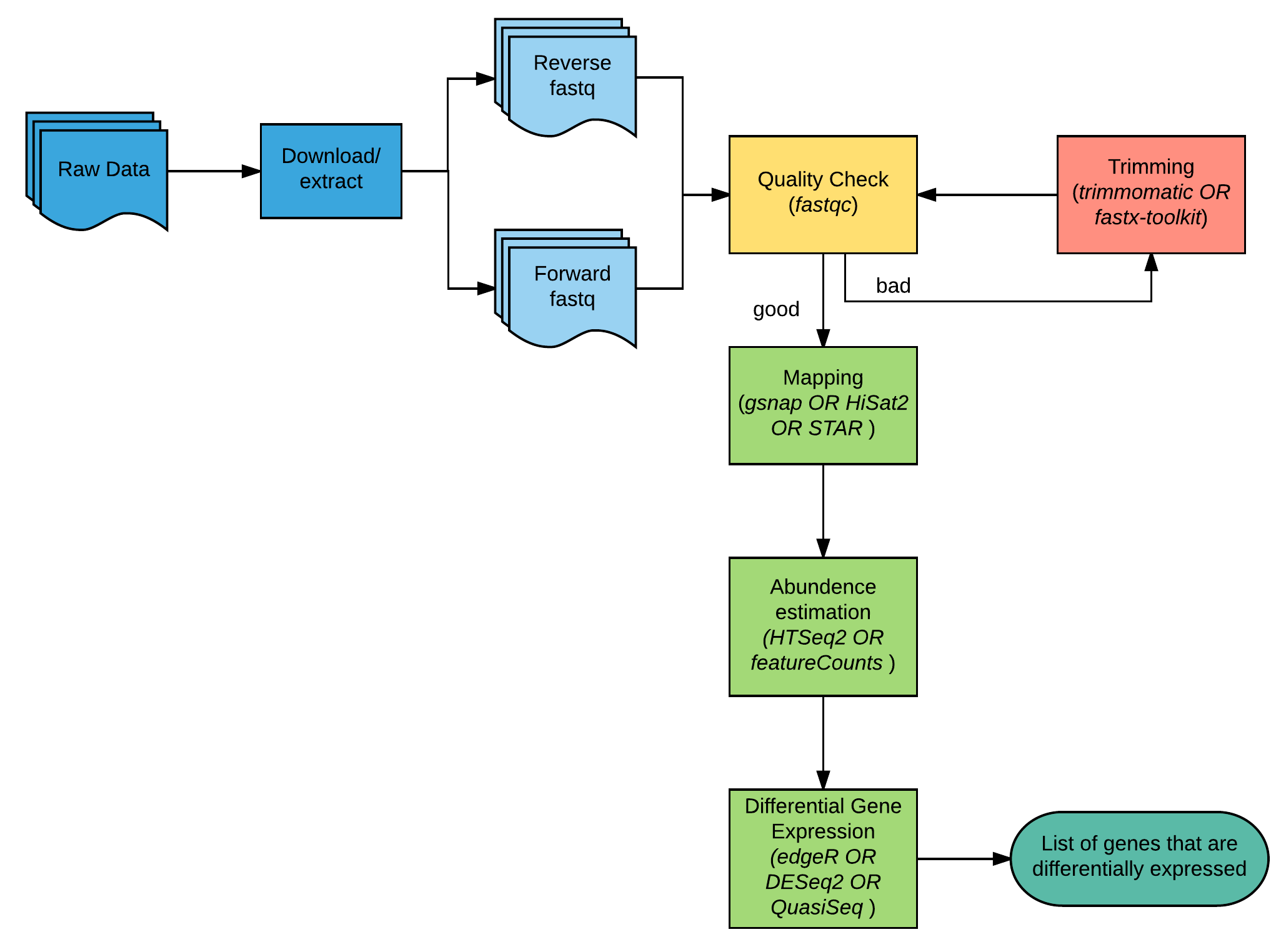 This document will guide you through basic RNAseq analysis, beginning at quality checking of the RNAseq reads through to getting the differential gene expression results. We have downloaded an Arabidopsis dataset from NCBI for this purpose. Check the BioProject ⤴ page for more information.

This experiment compares WT and atrx-1 mutant to analyze how the loss of function of ATRX chaperone results in changes in gene expression. The ATRX chaperone is a histone chaperone known to be an important player in the regulation of gene expression. RNA was isolated from three WT replicates and three mutant replicates using Trizol. The transcriptome was enriched/isolated using the plant RiboMinus kit for obtaining total RNA. RNA-seq was carried out in Illumina Hiseq 2500. The sequencing reads were generated as paired-end data, hence we have 2 files per replicate.

Generally, if the data is hosted at your local sequencing center, you could download it through a web interface or using wget or curl commands. However in this example, we will download data hosted on public repositories. There are several public data repositories that host the data.

The best option is to download the fastq files directly from the ENA server (e.g., check EBI ⤴). We can download them directly using wget by supplying the download links to each file; for example, in this case:

The data is hosted as SRA (Sequence Read Archives) files on the public archives in NCBI. We can bulk download these using aspera high-speed file transfer.

It is common to install software as environmental modules on your compute cluster. So we begin by loading the relevant modules. The following code expects that you have sra-toolkit, GNU parallel, and aspera installed on your computing cluster.

WARNING:
Sometimes, a user might run into perl issues while using edirect. The installed version of perl should support the HTTPS protocol.

Run the code snippet in the terminal window:

After downloading the SRA files, we convert them to fastq format. We can use the fast-dump command as follows: (this step is slow, so if possible, run these commands using GNU parallel ⤴). We assume that all SRA files are in a specific folder.

We also need the genome file and associated GTF/GFF file for Arabidopsis. These are downloaded directly from NCBI ⤴, or plants Ensembl website ⤴, or the Phytozome website ⤴. (^The Phytozome needs logging in and selecting the files.)

For this tutorial, we downloaded the following files from NCBI ⤴:

We can use wget to fetch both the Genome (Fasta) file and the Annotation (GFF) file:

We use fastqc, a tool that provides a simple way to do quality control checks on raw sequence data coming from high throughput sequencing pipelines (FastQC ⤴).

Watch the video below to check the quality of high throughput sequence using FastQC [source: BabrahamBioinf ⤴ ]

It uses various metrics to indicate how your data is. A high-quality Illumina RNAseq file should look something like this ⤴. Since there are 6 sets of files (12 files total), we need to run fastqc on each one of them. It is convenient to run it in parallel.

Because we have in total 6 quality outputs, we will have 6 HTML files and 6 zip files. We can use MultiQC ⤴ to aggregate the outputs and get a single HTML file detailing the data quality of all the libraries.

This will give you a combined HTML file and a folder named multiqc_data with containing three files describing the various statistics:

You can peruse the complete report or download the plots and view them, for example: 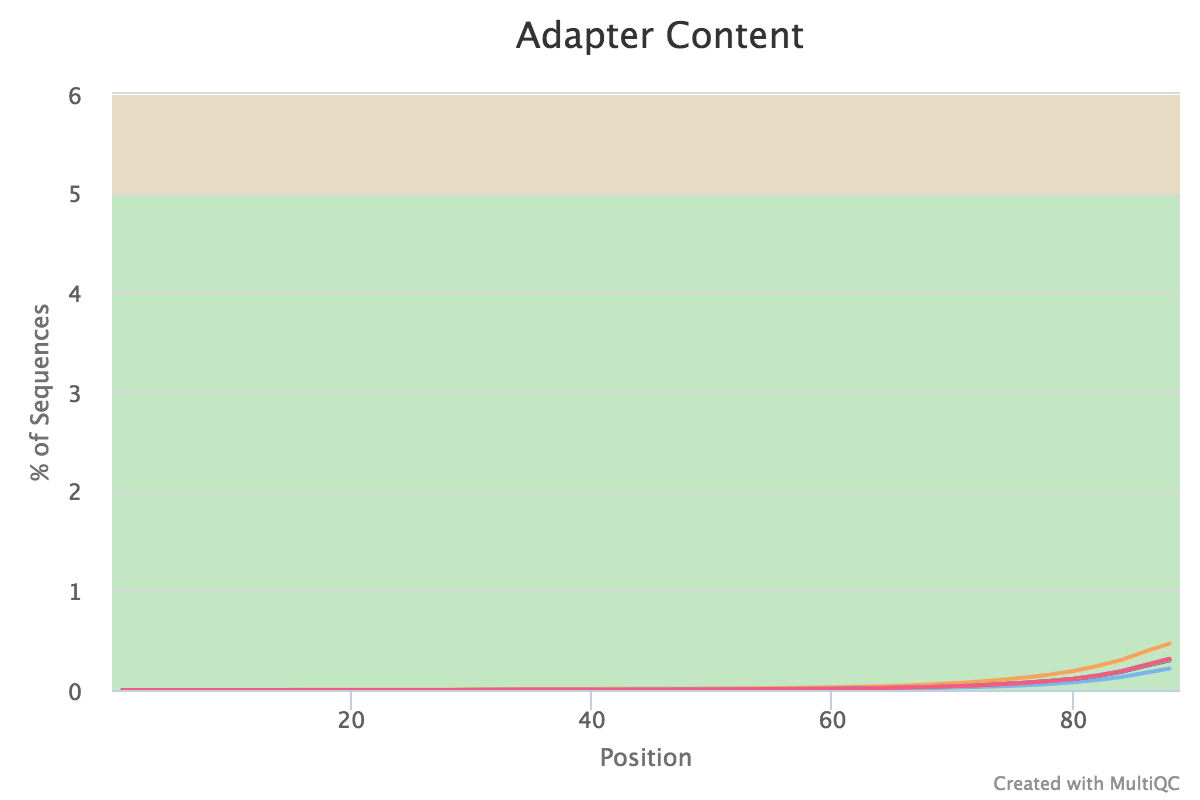 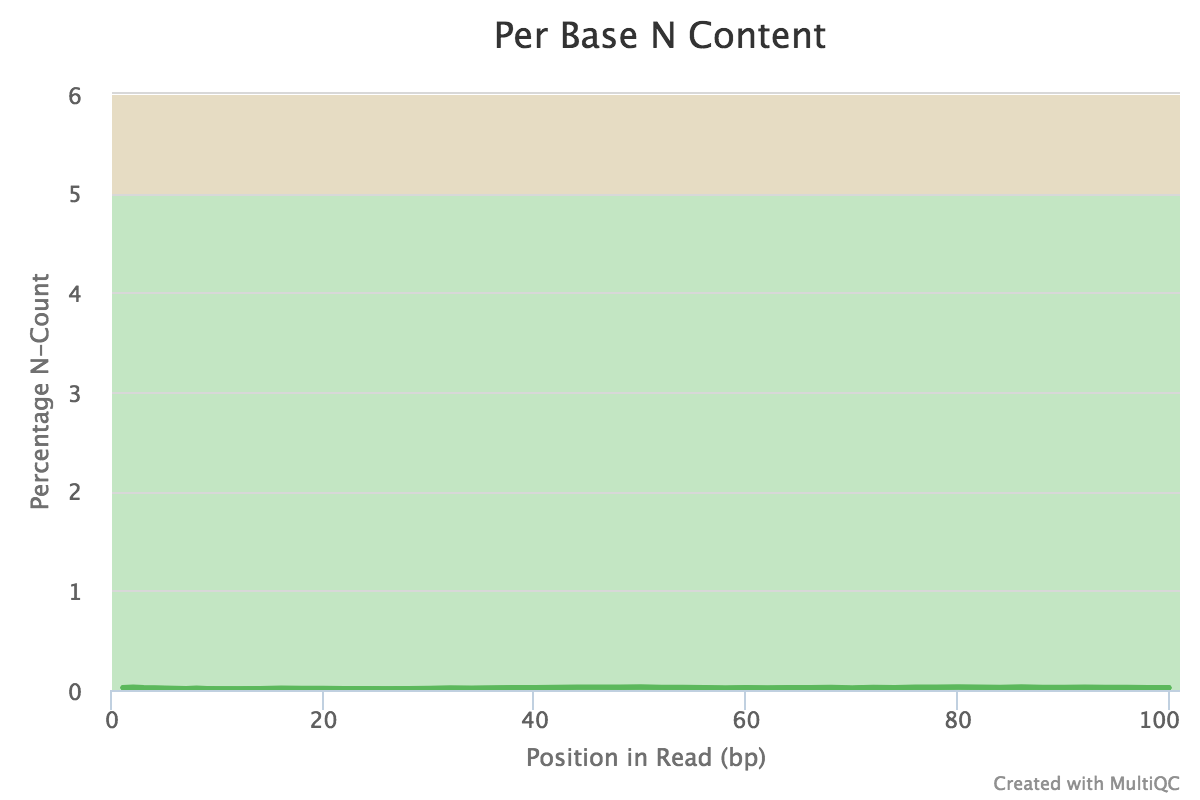 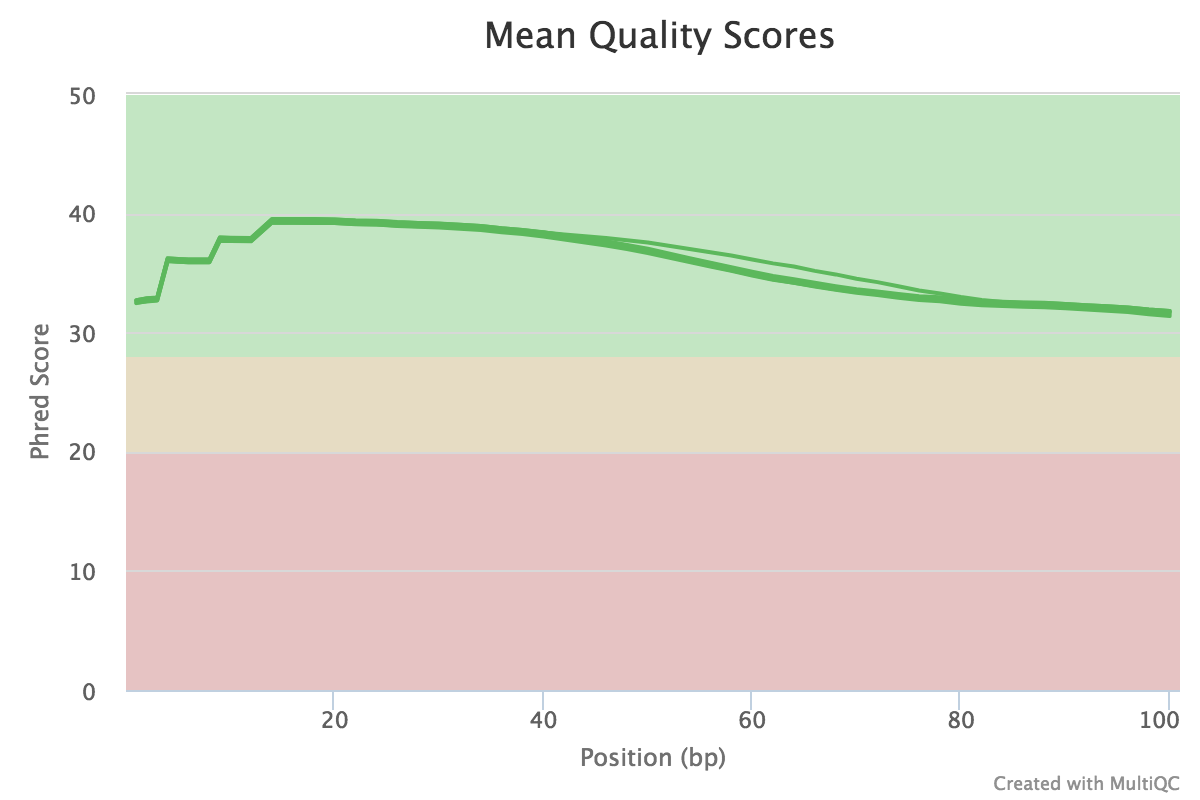 If satisfied with the results, proceed with the mapping. If not, then perform quality trimming. For example, see here ⤴. If the quality is very bad, excluding that sample from the analysis might make more sense.

3. Mapping reads to the genome

There are several mapping programs available for aligning RNAseq reads to the genome. Generic aligners such as BWA, bowtie2, BBMap, etc., are not suitable for mapping RNAseq reads because they are not splice-aware. RNAseq reads are mRNA reads that only contain exonic regions, hence mapping them back to the genome requires splitting the individual reads that span an intron. It can be done only by splice-aware mappers. In this tutorial, we will use HISAT2 ⤴, a successor of Tophat2.

For HiSat2 mapping, you first need to index the genome and then use the read pairs to map the indexed genome (one set at a time). For indexing the genome, we use the hisat2-build command as follows in a SLURM script:

^ Learn more about slurm ⤴ from the hands-on tutorial.

Let’s go to your working directory, where you downloaded the genome file. Create an empty file using the touch indexing_hisat2.sh command, open it using your favorite text editor in the terminal (e.g., nano or vim) and copy-paste the script from above. Find the GENOME_FNA= variable and update the path and filename of the genomic file. Save changes and submit the script into the SLURM queue:

WARNING:
Note to update the path and filename of the reference genome in the GENOME_FNA variable. If the downloaded file is zipped, decompress it before running the script:
gzip -d {filename}.fna.gz

PRO TIP:
Adjust the #SBATCH --time variable, provided in format hours:minutes:seconds. The provided value allocates the time at the computational node. If your setup is too short, the task will be interrupted prefinal. Otherwise, if it is too long, you will have a long wait in the queue.
Setting up #SBATCH --time=1:00:00 is sufficient for indexing the genome in this example.

Once complete, you should see several files with the .ht2 extension. These are the index files.

At the mapping step, we simply refer to the index using GCF_000001735.3_TAIR10_genomic as described in the next step.

For mapping, for each set of reads (forward and reverse or R1 and R2), we first set up a run_hisat2.sh script as follows:

For setup to run with each set of files, we can set a SLURM script (loop_hisat2.sh) that loops over each fastq file. Note that this script calls the run_hisat2.sh script for each pair of fastq files supplied as its argument.

Now submit this job as follows:

That should create the following files as output:

For quantifying transcript abundance from RNA-seq data, there are many programs available. Two most popular tools include, featureCounts and HTSeq. We will need a file with aligned sequencing reads (SAM/BAM files generated in previous step) and a list of genomic features (from the GFF file). featureCounts is a highly efficient general-purpose read summarization program that counts mapped reads for genomic features such as genes, exons, promoter, gene bodies, genomic bins and chromosomal locations. It also outputs stat info for the overall summarization results, including number of successfully assigned reads and number of reads that failed to be assigned due to various reasons. We can run featureCounts on all SAM/BAM files at the same time or individually.

You will need subread ⤴ and parallel modules loaded.

Let’s go to your working directory, where you downloaded and decompressed the annotation (GFF) file. Create an empty file using the touch run_feature_counts.sh command, open it using your favorite text editor in the terminal (e.g., nano or vim) and copy-paste the script from above. Find the ANNOT_GFF= variable and update the path and filename of the annotation file. Also, update the INDIR= variable using path to the directory with BAM files from the previous step. Save changes and submit the script into the SLURM queue:

This creates the following set of files in the specified output folder:

Each file has a commented line starting with a # which gives the command used to create the count table and the relevant seven columns as follows, for example:

Additionally, Summary Files are produced. These give the summary of reads that were either ambiguous, multi mapped, mapped to no features, or unmapped among other statistics. We can refer to these to further tweak our analyses etc.

Using the following command (a combination of paste and awk), we can produce a single count table. This count table could be loaded into R for differential expression analysis.

You could also edit out the names of the samples to something succinct, for example, S293 instead of SRR4420293.bam.

Now we are ready for performing DGE analysis ⤴!