Upon completion of this section on Genome Assembly you will understand the following:

What are the goals of a Whole Genome Sequence Assembly project?

Like any scientific endeavor, genome assembly starts with experimental design and its success depends on the following.

Why is it a Genome assembly a hard problem?

What are the two main Genome Assembly Algorithms?

Overlap layout consensus is an assembly method that takes all reads and finds overlaps between them, then builds a consensus sequence from the aligned overlapping reads. 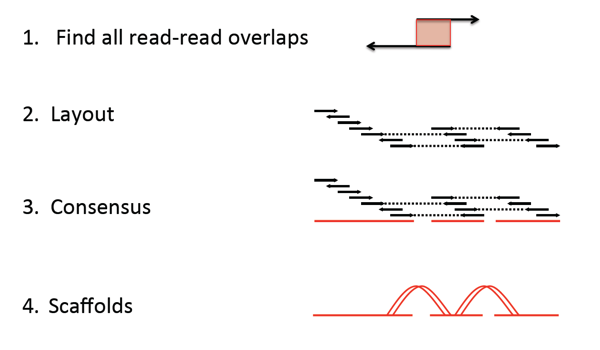 From the example above, it is easy to see how short k-mers can result in many paths resulting in many possible assemblies.

Which Genome Assembler should I use?

There are many genome assembly programs out there to choose from and depending on the type of sequencing technology was used to generate the raw data and the organism you are assembling it can be challenging to decide which assembler to use. Here are some basic guidelines to determine which assembler may give you the best assembler (a place to start)