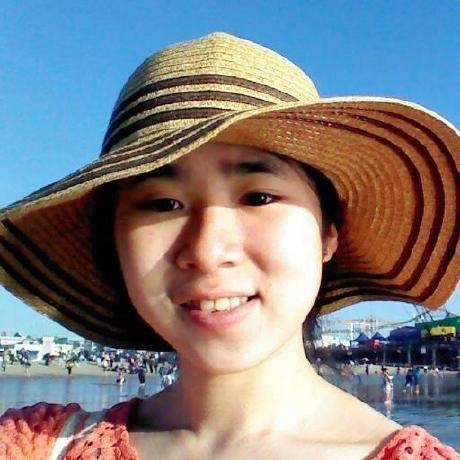 I am an Iowa State University graduate, with a PhD in Bioinformatics and Computational Biology. I have been programming (in one language or another) since 2006 and have an interest in data visualization and software development. My research focus has been on analyzing and merging networks, monitoring the evolution of influenza A viruses in swine, and writing cross-platform pipelines. In 2020, I joined the Genomics Informatics Facility in the hopes of developing interdisciplinary pipelines and tutorials to meet the needs of the widespread research community.

There are many gene correlation network builders but we shall provide an example of the WGCNA R Package.

The WGCNA R package builds “weighted gene correlation networks for analysis” from expression data. It was originally published in 2008 and cited as the following:

We will assume you have a working R environment. If not, please see the following tutorial:

Since WGCNA is an R package, we will need to start an R environment and install from R’s package manager, CRAN.

The WGCNA pipeline is expecting an input matrix of RNA Sequence counts. Usually we need to rotate (transpose) the input data so rows = treatments and columns = gene probes. 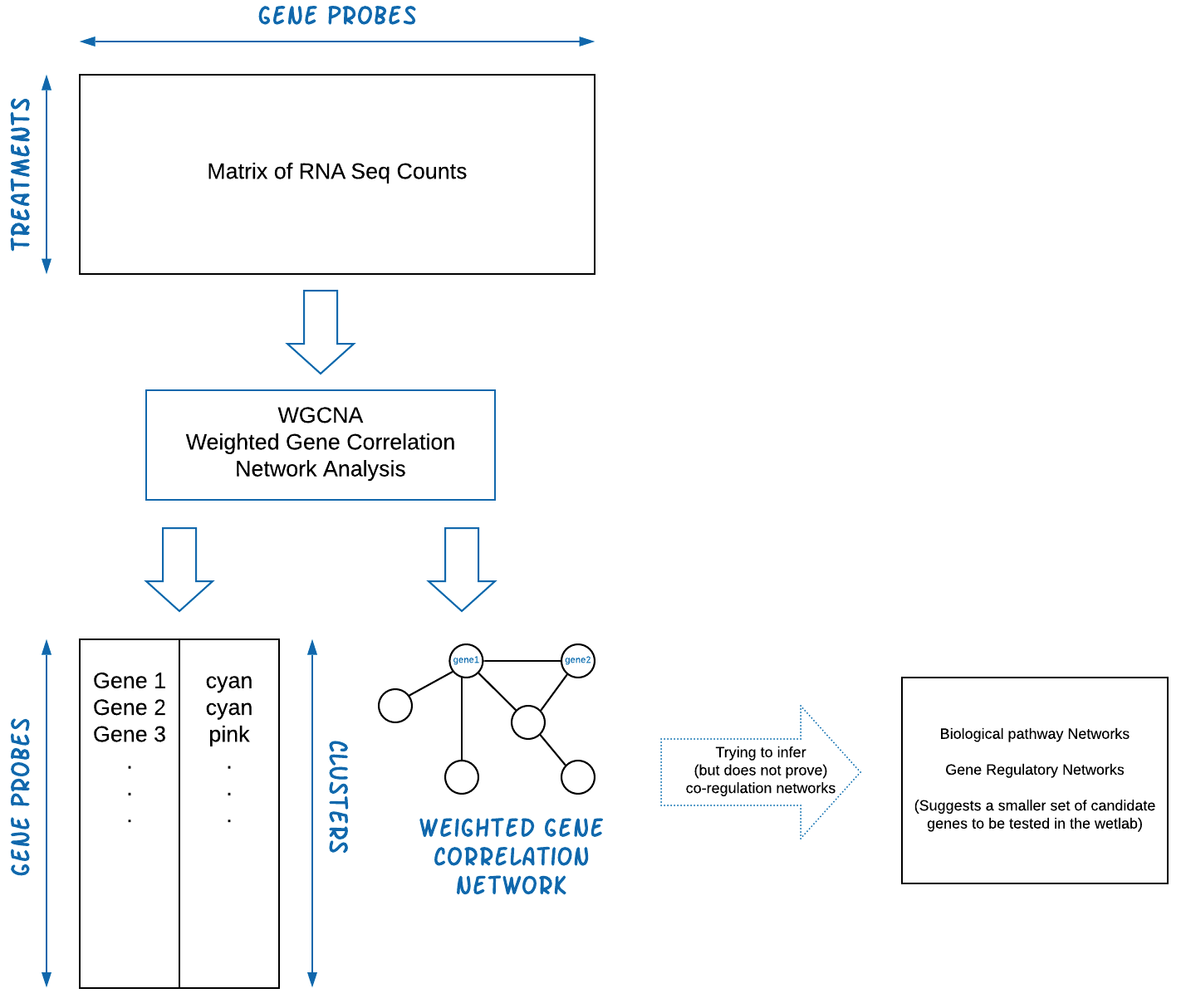 The output of WGCNA is a list of clustered genes, and weighted gene correlation network files.

We shall start with an example dataset about Maize and Ligule Development. [Add description of data and maybe link to paper here] For more information, please see the following paper:

The dataset can be downloaded from the NCBI entry or using wget from the bash commandline.

This analysis requires the following R libraries. You might need to install the library if it’s not already on your system.

We’re going to conform to the tidyverse ecosystem. For a discussion on its benefits see “Welcome to the Tidyverse” (Wickham et al, 2019). This allows us to organize the pipeline in the following framework (Fig. from “R for Data Science” (Wickham and Grolemund, 2017)):

Load and look at the data

If you are in RStudio, you can also click on the data object in the Environment tab to see an Excel-like view of the data. 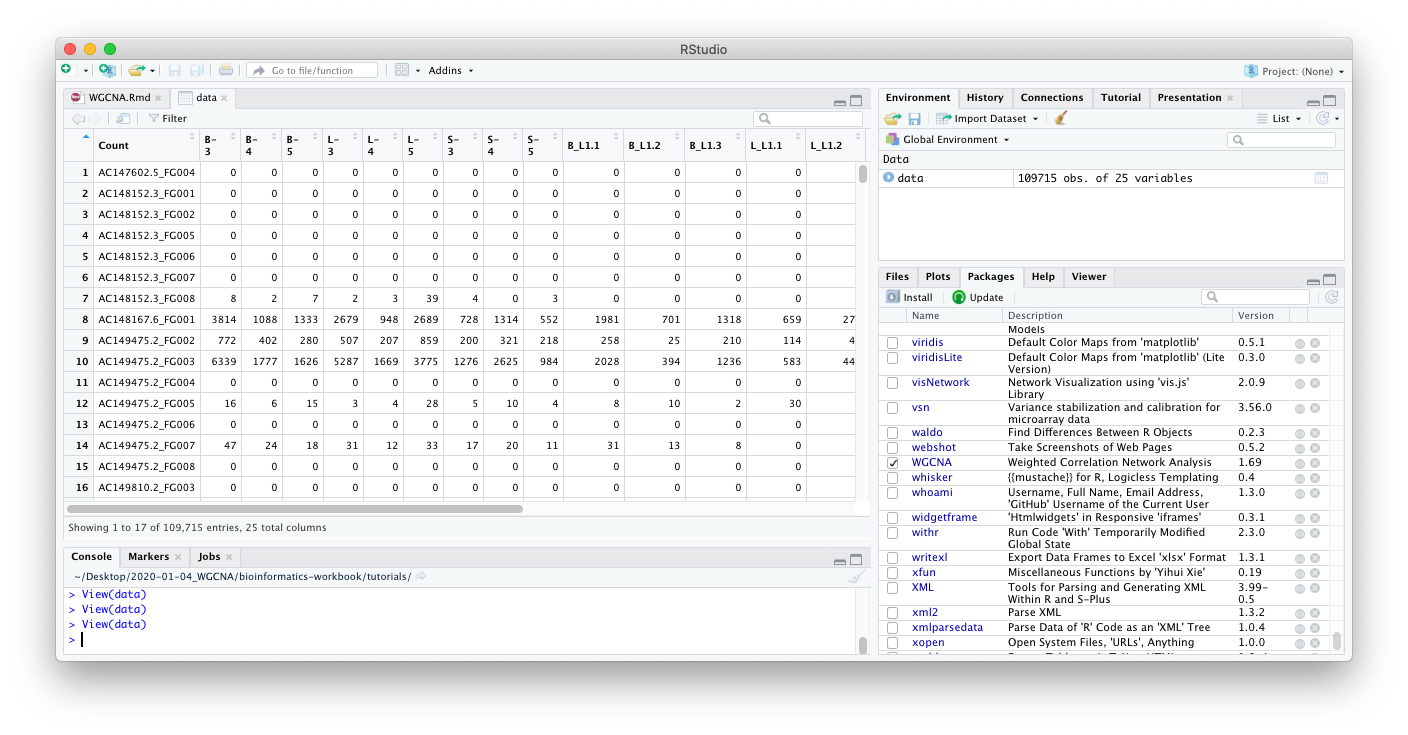 From looking at the data, we can come to the following insights:

The following R commands clean and tidy the dataset for exploratory graphics.

Think through what kinds of plots may tell you something about the dataset. Below, we have provided an example plot to identify any obvious outliers. This may take a while to plot. 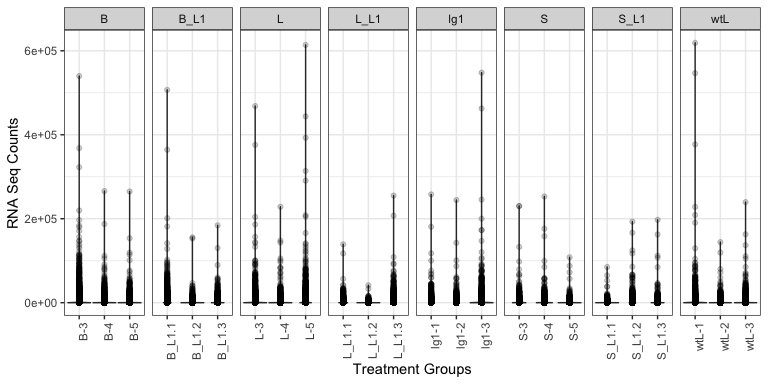 We’ll use DESeq to normalize the counts before sending to WGCNA. Optionally you could subset to only genes that are differentially expressed between groups. (The smaller the number of genes, the faster WGCNA will run. Although there is some online discussion if this breaks the scale-free network assumption.)

Prepare DESeq input, which is expecting a matrix of integers. 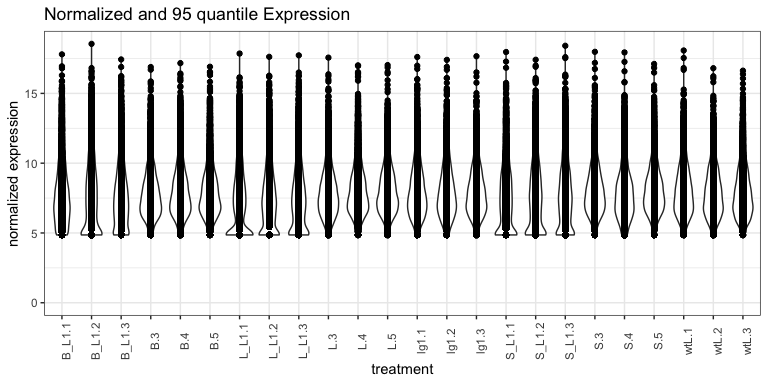 Now let’s transpose the data and prepare the dataset for WGCNA.

We can see now that the rows = treatments and columns = gene probes. We’re ready to start WGCNA. A correlation network will be a complete network (all genes are connected to all other genes). Ergo we will need to pick a threshhold value (if correlation is below threshold, remove the edge). We assume the true biological network follows a scale-free structure (see papers by Albert Barabasi).

To do that, WGCNA will try a range of soft thresholds and create a diagnostic plot. This step will take several minutes so feel free to run and get coffee. 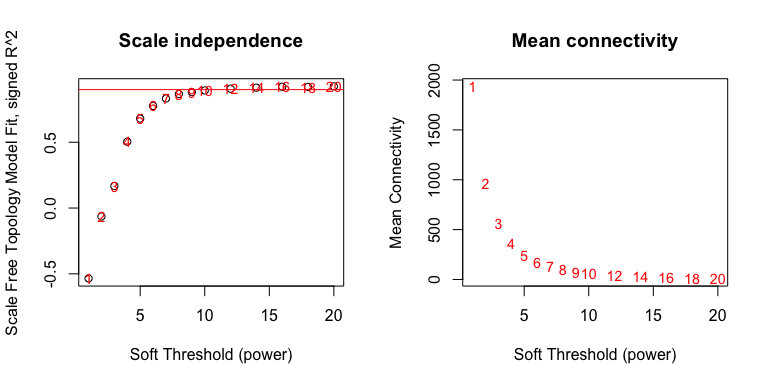 Pick a soft threshold power near the curve of the plot, so here we could pick 7, 8 or 9. We’ll pick 9 but feel free to experiment with other powers to see how it affects your results. Now we can create the network using the blockwiseModules command. The blockwiseModule may take a while to run, since it is constructing the TOM (topological overlap matrix) and several other steps. While it runs, take a look at the blockwiseModule documentation (link to vignette) for more information on the parameters. How might you change the parameters to get more or less modules?

Let’s take a look at the modules, there 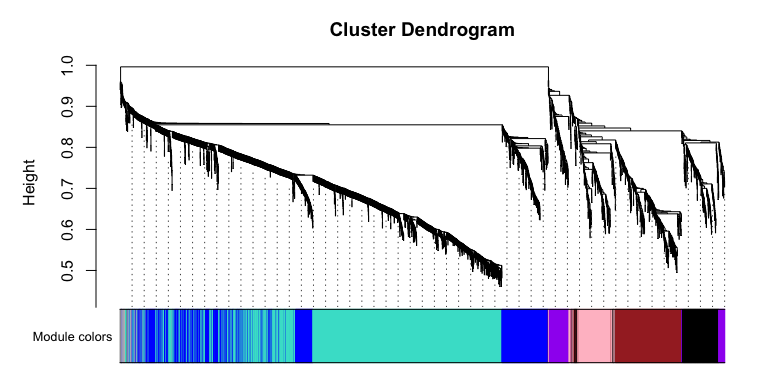 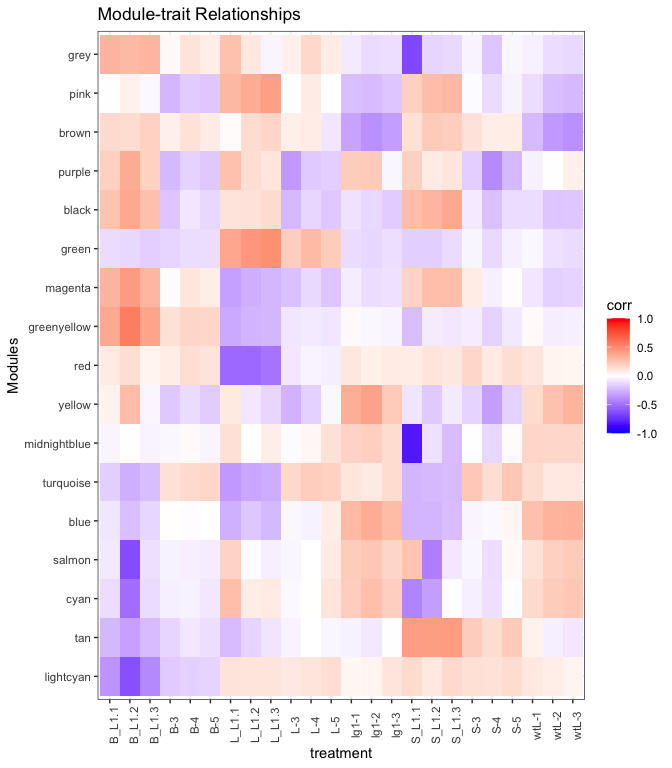 Looking at the heatmap, the green seems positively associated (red shading) with the L groups, turquoise module is positive for the L but negative (blue shading) for the L_L1 groups, and tan module is positive in the S groups but negative elsewhere. There are other patterns, think about what the patterns mean. For this tutorial we will focus on the green, turquoise, and tan module genes.

We’ll pick out a few modules of interest, and plot their expression profiles 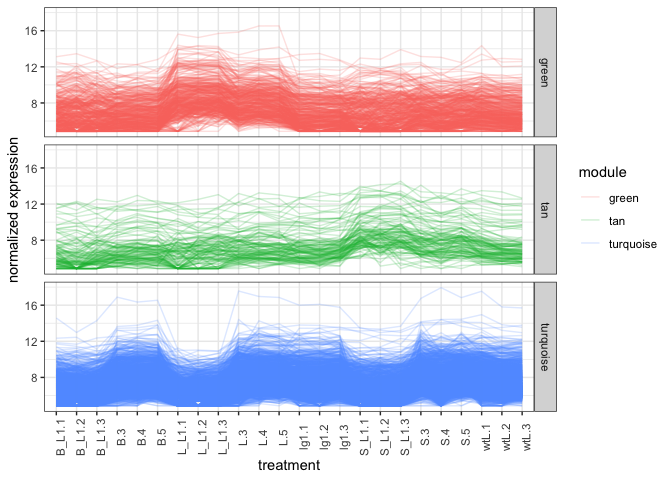 It is possible to plot the modules in green, tan, and turquoise colors but for now we’ll use the auto colors generated by ggplot2. From the expression line graph, the line graph matches the correlation graph where Green module genes are higher in the L groups. Tan genes seem higher in the S groups, and Turquoise genes are low at L_L1 and S_L1 and maybe B_L1 groups.

The network file can be generated for Cytoscape or as an edge/vertices file.

The edgelist.txt exported is the complete correlation network for modules green, tan, and turquoise. The network still needs to be subsetted down (by weight or minimal spanning) to identify hub genes. Steps forward include identifying hub genes and gene ontology enrichment. The edgelist can be loaded into igraph (R package) or Cytoscape (standalone Java Application) for further network analysis.

We have taken in RNASeq count information, identified the top (95% quantile) differentially expressed genes, sent it to WGCNA to identify modules and create the gene correlation network for those modules.