My main interests are in the fields of bioinformatics and evolutionary genomics. Currently, I am working on various projects involving next-generation sequencing including the first de novo assembly of a teosinte genome. I am also developing pipelines to streamline the assembly and annotation process for newly sequenced organisms. My long-term goal is to study the genome organization and evolution of grass species.

One of the primary comparative analyses that can be done once you have the genome is by visualizing the synteny with closely related species. Many characteristics for the genome can be easily highlighted with a good dotplot. Structural variations like inversion, deletion, duplication and insertions can be identified from these dotplots.

You will need two genomes for generating dotplots. A higher quality, preferably at chromosome level “reference” genome (also referred as target genome) and your genome (scaffold or contigs are okay, but chromosomes would be ideal), which is referred as query genome. We will run this tutorial using maize genomes, but can be easily applied on any other genome as well. 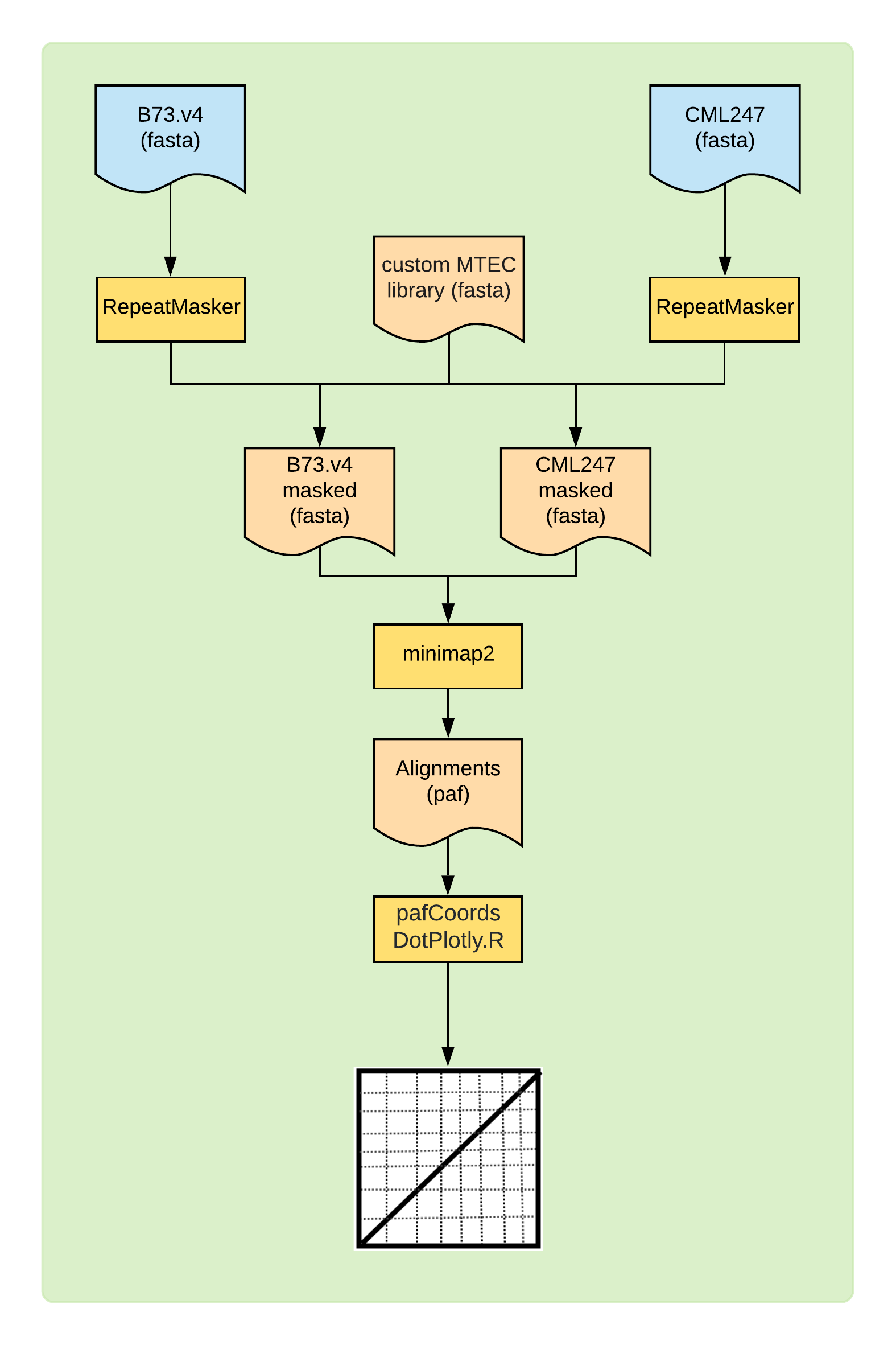 Following programs are needed for this tutorial. Most of them can be installed via Conda environment, but some of them can be directly cloned from GitHub:

For masking the maize genomes, it is essential to have an accurate, custom TE library. Using a generic repeat database will mask the genic regions and other potentially non-repetitive portions of the genome, leading to inaccurate downstream analyses.

Ou Shujun, from Hufford Lab, here at ISU created a new maize repeat library, using The Extensive de novo TE Annotator (EDTA). This is the Maize TE Consortium (MTEC) curated TE library created in 2014/10/10. The original sequence names were converted to fit the naming scheme of RepeatMasker, so that TEs could be parsed into class, super-families, and families. A TE-free whole-genome CDS dataset derived from the B73v4 annotation was used to clean any potential genic sequences in this MTEC library. TE sequences containing more than 1000 bp or 30% of genic sequences were discarded entirely, otherwise genic sequences were removed and the remaining sequences were joined. Cleaned TE sequences shorter than 80 bp were also discarded. As terminal structure of TEs is the key for their identification, any TE sequences with the beginning or ending 20 bp masked by CDS sequences were determined false positives and removed. Overall, a total of 1,359 sequences were remained from the original 1,546 sequences.

Once complete, you will have following output files:

Here, the <name>.fa.gff provides a GFF file for masked regions, that can be visualized in IGV and the <name>.fa.masked provides you a masked genome that is needed for our subsequent steps.

Although there are many programs to align the genomes, MiniMap2 does the job really well at lightning speed. The repeatmasked genomes can be aligned in less than 10 minutes, running on a cluster with 16 CPUs, 128Gb RAM. Moreover, the preset options eliminates a guess work of what options that might or might not work for your specific condition. The aligner is also versatile and can use many different data inputs as well.

The resulting file will be

Which is now ready to plot.

For Dot plot, we will use dotPlotly. There is a R Shiny app as well, but there is a limit on the file size that can plotted. Morover, if you upload a complex file like maize alignment, it will be very sluggish and interactive-ability will not be usable. So, we will download the script and run them locally to generate a static dotplot.

And the plot it generates is as follows: 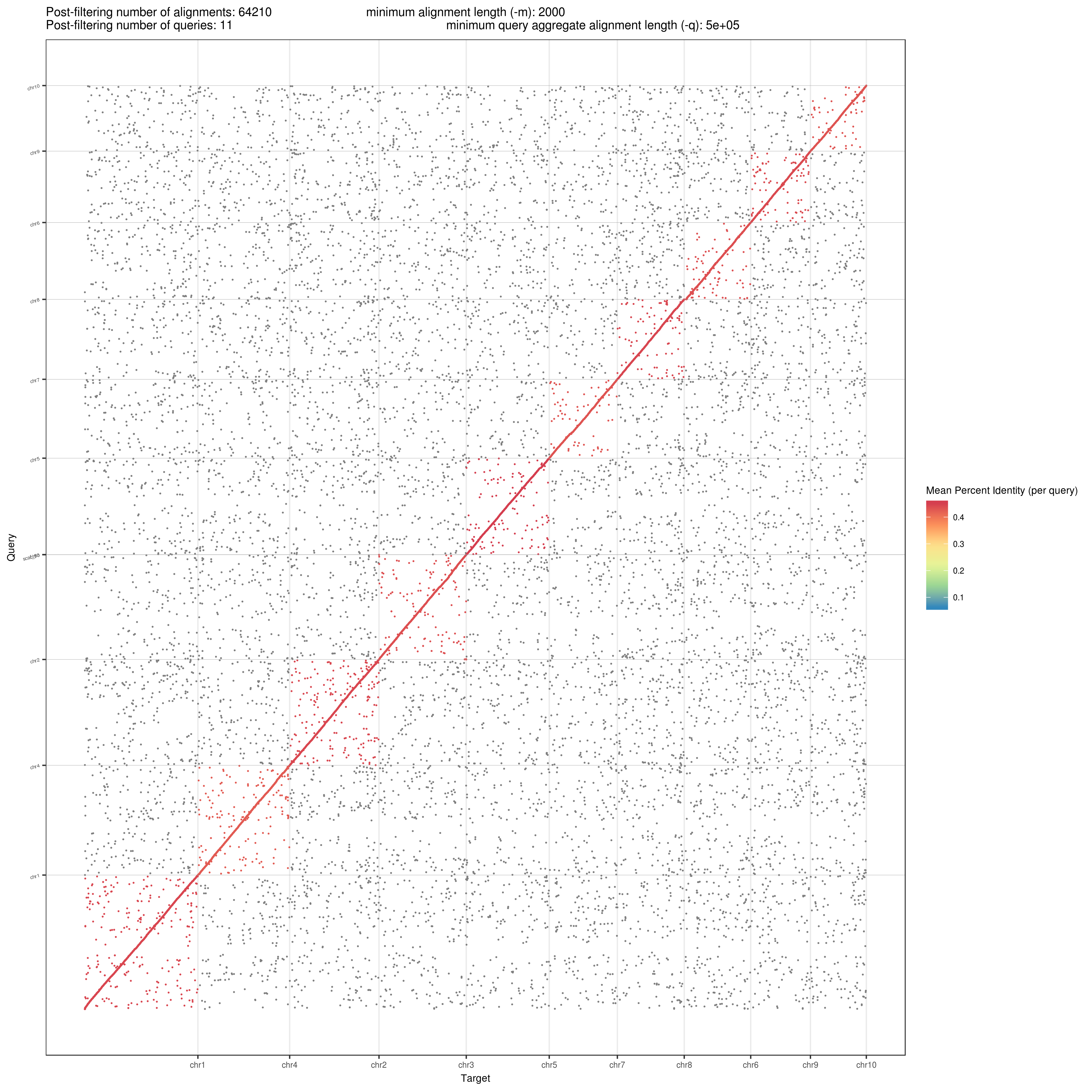 Figure 2: Dot Plot comparing the 2 genomes. Here, target is B73 V4 and query is CML247. You can rename the axis labels in the plot by modifying the code.