Data sets in this tutorial

Many of the initial processing steps in metagenomics are quite computationally intensive. For this reason we will use a small dataset from a mock viral community containing a mixture of small single- and double-stranded DNA viruses.

If you are running this tutorial on the Ceres computer cluster the data are available at:

Ceres is the computer cluster for the USDA Agricultural Research Service’s SCInet computing environment. From Terminal or Putty (for Windows users) create a secure shell connection to Ceres. You can similarly connect to any remote machine that you have access to.

Once you are logged into Ceres you can request access to an interactive node. In a real analysis you would create a script that runs all the commands in sequence and submit the script through a program called Sbatch, part of the computer’s job scheduling software named Slurm.

When you are done at the end of the tutorial end your session like this.

Create a directory for the tutorial.

The data file we will be working with is here:

Lets take a peek at the data.

We can see that this data are interleaved, paired-end based on the the 1 and 2 after the initial identifier. From the identifier and the length of the reads we can see that the data was sequenced in 2x150 mode on an Illumina MiSeq instrument.

For speed we will be subsampling our data. the original fasta file has been shuffled (keeping pairs together) to get a random sampling of reads. To subsample we will use zcat to unzip the file and stream the data out. That data stream will be “piped” (sent to) the program head which will display the first 2 million lines and that displayed text will be written to a file with the > operator.

Raw sequencing data needs to be processed to remove artifacts. The first step in this process is to remove contaminant sequences that are present in the sequencing process such as PhiX which is sometimes added as an internal control for sequencing runs.

Lets look at the output:

0.22% of our reads contained contaminants or were too short after low quality reads were removed, suggesting that our insert size selection went well.

If we look at the contam_stats.txt file we see that most of the contaminants were known Illumina linkers. Because so many of these have been erroneously deposited in the NT database, Blasting the contaminant sequences will turn up some very odd things. The first sequence in our contaminants file is supposedly a Carp.

With shotgun paired end sequencing the size of the DNA sequenced is controlled by physically shearing the DNA and selecting DNA of a desired length with SPRI or Ampure beads. This is an imperfect process and sometimes short pieces of DNA are sequenced. If the DNA is shorter than the sequencing length (150pb in this case) The other adapter will be sequenced too.

We can trim off this adapter and low quality ends using bbduk.

Looking at the output

From the summary we can see that our average insert size was 234bp and 54% of reads could be joined. From the insert-size.txt histogram file we can plot the data and see the shape of the distribution.

Most or our cleanup work is now done. We can assemble the metagenome with the Succinct DeBruijn graph assembler Megahit.

Looking at the assembly

Although its not generally required, we can also visualize our assemblies by generating a fastg file

Hit the Draw Graph button. Now all the assembled contigs are visible. Some are circular, some are linear and some have bubbles in the assembly. 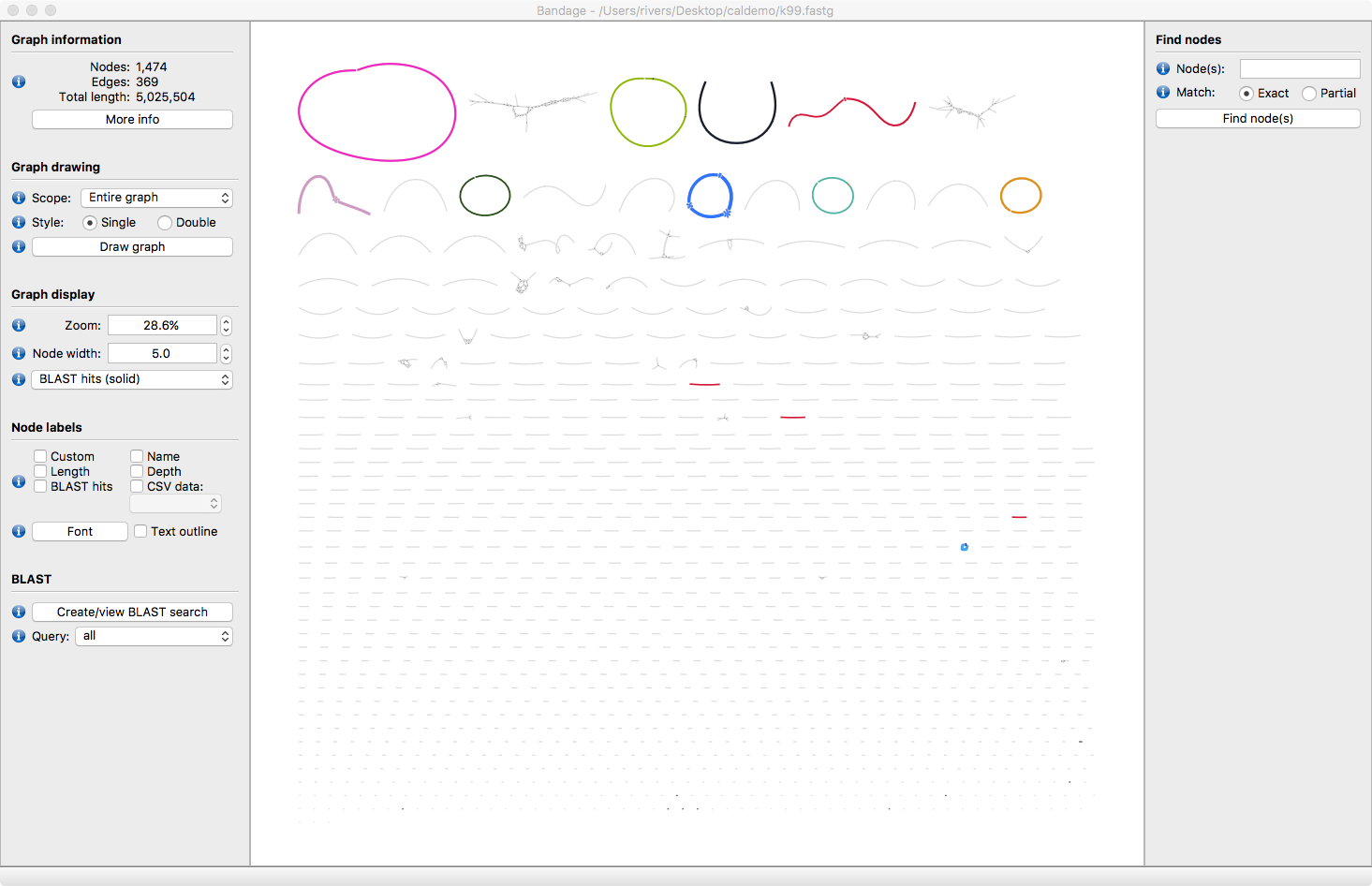 IF you have a Ssand-alone copy of Blast+ installed on your computer you can label the contigs with with the reference genomes. 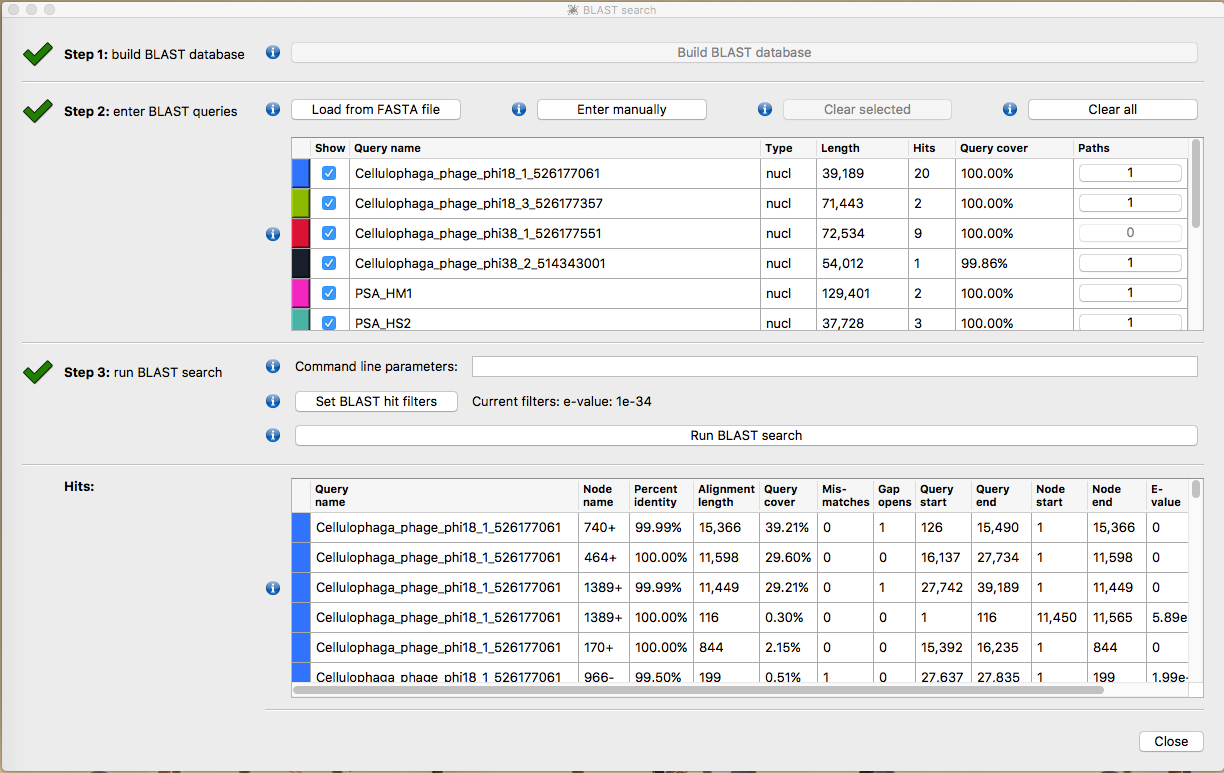 The contigs will now be taxonomically annotated. Take some time to explore the structure of the contigs. Which ones look correct? What kinds or errors are present in the assembly?

What are the contigs that assembled but were not identified by Blasting to our reference database? The fourth largest node ,Node 987 is actually genomic DNA from the bacteria Cellulophaga baltica the host of the 6 of the phages in our metagenome. Our protocol can detect and assemble this host DNA even though its present at 10-100 times lower abundance than the phages in our sample.

If we go back to the Ceres command line we can continue with the next common step in read based assembly, mapping. Two common types of mapping can occur. You can map reads back to a known reference. This is great if you have closely related organisms of interest and you are trying to understand population variance or quantify known organisms. A number of programs can be used for mapping. Bowtie2 is the most common but in this case we will use bbmap.

Map reads back to known reference

When the results are mapped to a reference we are able to infer the Error rate for insertions, substitutions and deletions in our sequences. Almost all of these errors come from sequencing itself, not assembly. Note too, how much higher the error rate is for Read 2 than Read 1.

We can also see the insert size for those reads that did not merge is 300.

The mapper writes text-based sam mapping files. It’s usually helpful to convert these files to a binary format called bam which is faster to access and smaller. Fortunately, bbmap will automatically make a little script to do that for us using the program Samtools. To run it enter this command.

It is also possible to map reads back to the contigs we just generated. Reads are mapped back to contigs for several reasons. Once genes are called gene counts can be derived from mapping data. Contig mapping data is also used in genome binning.

Map reads back to known reference

With the contigs the match-rate was much higher. 95% of our reads map back to the assembly which is a very high number. in a well assembled complex metagenome we might expect 50-70% of reads to map.

As we did before we will convert the sam file to a bam file.

Part one of the metagenome assembly tutorial deals with the most of the heavy computational work that requires computers with high memory and many processors. In real applications this kind of work would be submitted as a batch job using the SLURM scheduler so that it can run without your being logged into Ceres.

The next major part of an assembly based workflow involves calling genes, annotating genes and binning contigs into genomes. We will address this in Part 2 of the metagenomics tutorial.