Have you ever wanted to figure out which reads are the most useful for creating a more contiguous assembly? Here I assemble a nematode genome, assess contamination using Blobtools2, extract non-contaminant reads, and reassemble.

Identify contamination in this initial assembly with Blobtools2

This can be done with any reads, though mapping long reads with minimap2 is ridiculously fast.

Checking my mapping percentages to see if they are reasonable

Run a megablast on your assembly

Note, if you do not have -task megablast set, the blast will take much longer. Also note the -outfmt, it must be in this format to attribute taxonomy info for blobtools

Set up file structure for blobtools

Get the taxon info and move it into a folder

Once done, connect to novaDTN (internet capable node) through your personal computers terminal 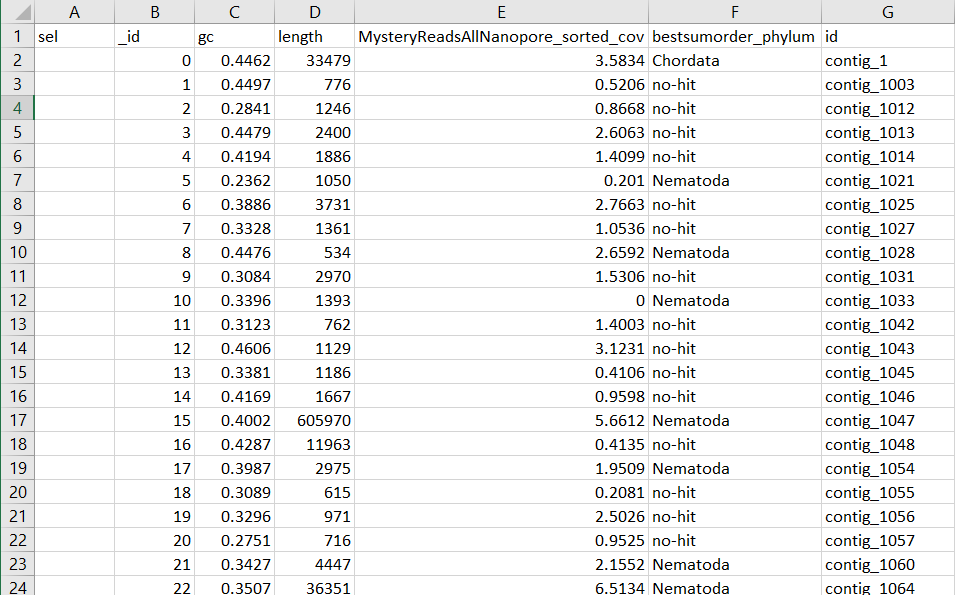 Yay, you now can filter contigs that are contaminants. The only file needed is the blobtools.csv output, though I grab the circle blob plot also. With my nematode assembly, I frequently get contigs attributed to arthropoda, as they more highly represented sequences in NT.

I have lots of real contaminants in my assembly, so I am hard-filtering. Contigs/scaffolds had to be attributed to Nematoda, Arthropoda, or no-hit, and no-hit must have coverage.

Make sure you arent missing contigs that were mislabeled as other taxa by blobtools, by searching for your most closely related species in your blast output. I did not have any mislabeled contigs, so nothing was added here.

Extract only reads that do not map to contaminant contigs

The read name and orientation of the contaminant reads, are extracted with the fastq if you do not do this step.

Extract the reads mapping to the contigs you want to keep, and convert to fastq

Filter fastq by length of at least 2kb

Assembly 2 without any contaminating reads or reads shorter than 2kb

Check assembly quality and gaze in awe at the improved contiguity