Here at the ISUGIF, we have used multiple different contig assemblers and had success with this pipeline. Typically we assemble the genome with long reads and polish (long or illumina reads) prior to running the pipeline. I do not know if this is something that affects the downstream product, but it is an important consideration, considering that long read assemblies are typically error prone.

It is not always clear where to find the information you need to run the pipeline, so I will lay out the many resources that I accessed while learning to run this pipeline.

There is lots of information to be had here at the juicer github site.

If you have problems with installation and/or need help with understanding a result. The aiden lab forum is an invaluable resource.

This is the folder structure that we are trying to achieve with a few modifications. Juicer was already installed as a module, so the initial setup of recommended for juicer did not apply here. You are going to a folder with four subfolders containing: HiC reads, bwa index of your genome, predicted restriction enzyme cuts for your genome (if needed), and your fastq files split into appropriate sizes.

softlink and index the genome sequence in the references/ folder

I did not do this for this genome assembly, as my HiC was generated with an endonuclease.

Get your HiC reads ready

While juicer does support splitting gzipped files, we had problems getting juicer to split the reads. Thus I worked around this to make juicer assume the fastq files are already split.

Create a chromosome sizes file in the format “name\tsequence_length”

Move to the submission directory and submit The trick here is setting juicer’s short, medium, and long queue times, as they will not likely be default for your system.

Your stdout and stderr will tell you almost nothing about your run. If at the end of your run, you are seeing large merged_sort.txt and a merged_nodups.txt files, then you likely succeeded. Note that these files are usually hundreds of MB.

If you do not have a merged_sort.txt, the first thing to check is if your split fastq files (in splits/) each aligned and created a sam file. If you want to know why they failed, then you’ll have to investigate the debug folder.

If you have a merged_sort.txt file, but lack the merged_nodups.txt, then the read deduplication step failed. In most cases this will be a memory issue that can be fixed by creating a greater number of splits of your fastq files.

You will need to go into the debug folder, which will be /02_WhiteMysteryPseudomolecule/01_JuicerSetup/debug for me.

If juicer does not complete, you can restart from the last completed stage using -S with one of the following options “chimeric”, “merge”, “dedup”, “final”, “postproc”, or “early”.

Set up and run 3D-DNA assembly

When I install I usually use singularity containers or conda evironments to address my lack of sudo privileges. LastZ installation is not necessary, as it is only useful for highly heterozygous genomes.

Clone and set path to 3d-dna

This is the option you should try if your HiC coverage is low or suboptimal in some way.

If changing normalization doesn’t work, then the “ADDITIONAL OPTIONS” in need to be modified until there is enough coverage for 3d-dna to operate. These are in run-asm-pipeline.sh

While I did want to include a video of edits, the aiden lab does a pretty good job of documenting how to use juicebox, once it is loaded.
Check out these videos to discover how to read the HiC maps, spot inversions, and get a general feel for juicebox.

Before editing with Juicebox 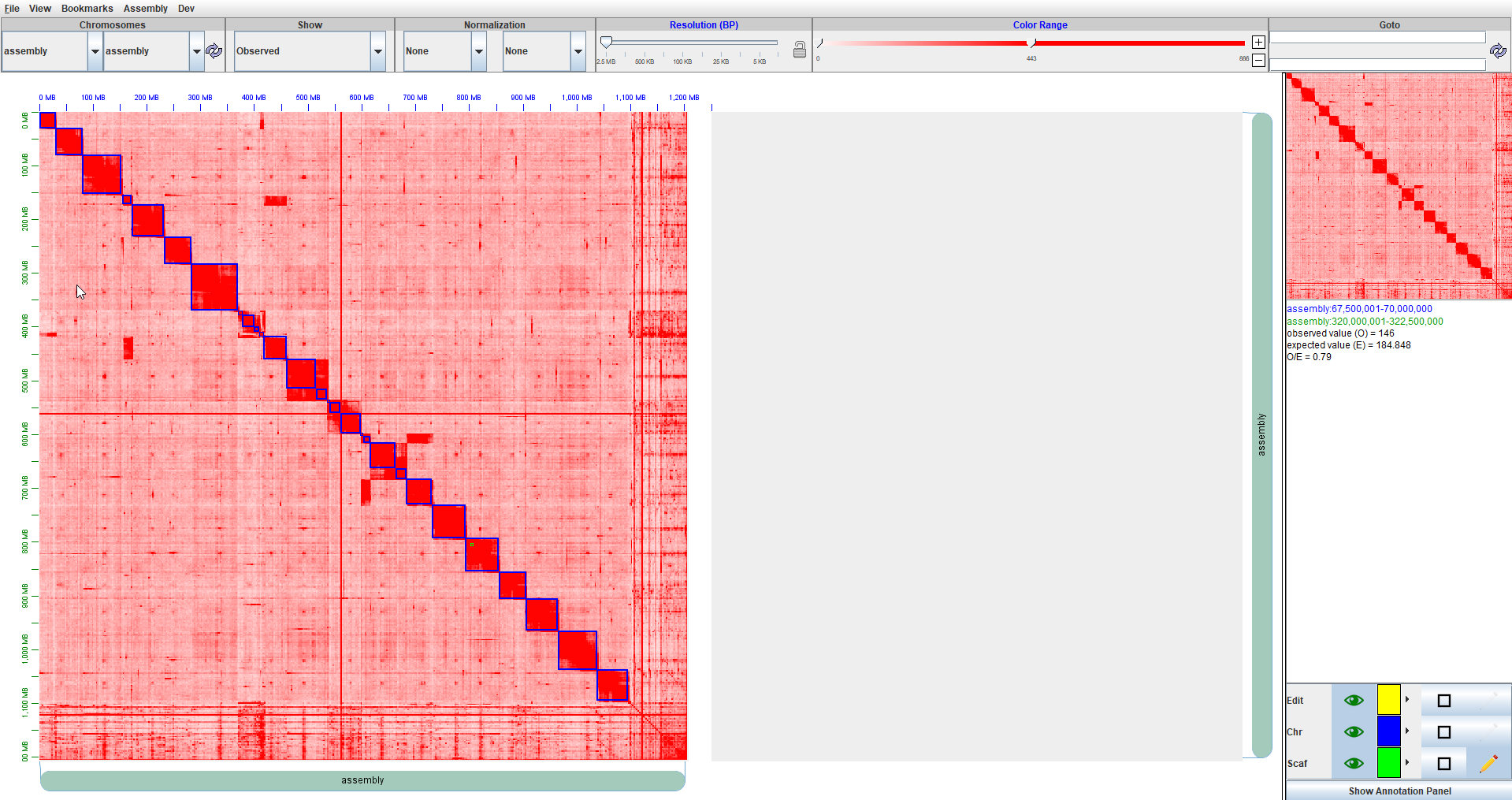 After editing with Juicebox 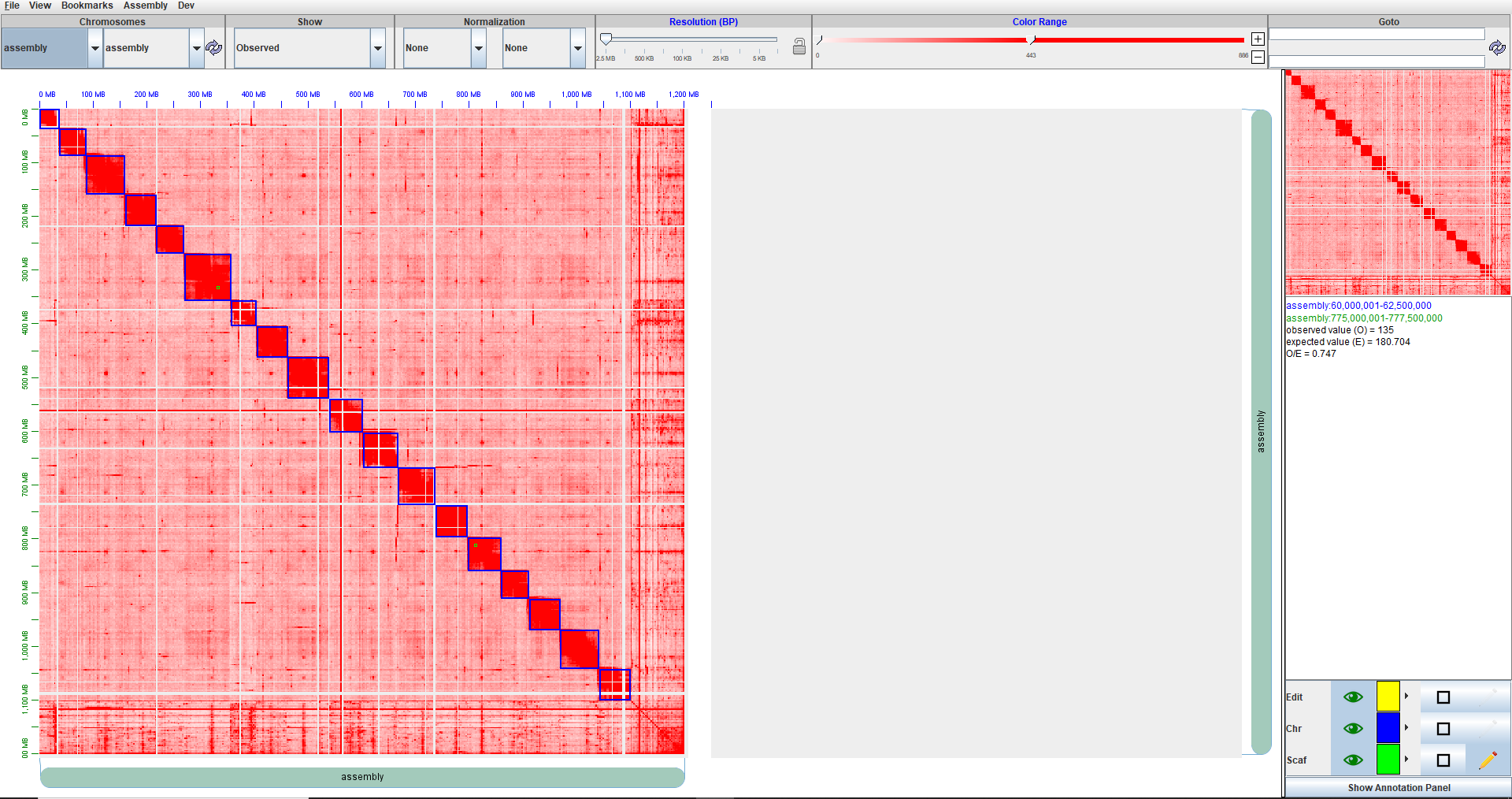 Before juicer, juicebox, and 3d-dna

After juicer, juicebox, and 3d-dna