Tutorial of how to run Maker2 gene annotation pipeline

I have outlined how to perform a gene annotation of the soybean cyst nematode (Heterodera glycines) genome using Maker2.

This is the original MAKER publication, which details more about the general MAKER algorithm, when MAKER lacked all other gene predictors besides SNAP. MAKER Publication

This is the original publication for the MAKER2 gene prediction pipeline. This version of maker includes the addition of multiple gene ab-initio prediction tools as well as AED score support for gene models. MAKER2 Publication

There are a number of nice Maker tutorials that can found online. Utah MAKER Tutorial

Here is a Maker tutorial that gave me the idea to use BUSCO to train Augustus. Darren Card Tutorial

Is there a specific order to run different predictors in Maker? While there are multiple ways to run Maker, all tips and tutorials that I have run across have always done the maker annotation first, and then incorporated the other ab-initio predictors subsequently. This leads us to the first step of finding all transcriptional and protein resources for the initial MAKER prediction.

For the soybean cyst nematode, that includes all publicly available resources for the Tylenchida. This includes the predicted transcripts and proteins from all genome assemblies in this clade.

Download transcripts and proteins associated with the assembled genomes for species in your clade. I downloaded mine on 4/20/18 from: https://parasite.wormbase.org/ftp.html

Download all EST and protein sequences associated with your species and related species. Downloaded from NCBI 04/19/18

Concatenate H. glycines proteins with genome predicted proteins, as well as the two categories of transcripts (H. glycines and alternative species in the clade)

Gather all of your private data also. For H. glycines, we had a previously generated gene annotation using Braker MAKE SURE THERE ARE NO SPECIAL CHARACTERS IN YOUR SCAFFOLD NAMES!

Now that all the files have been corrected for running maker, create a new folder and softlink all needed data. MAKE SURE THERE ARE NO SPECIAL CHARACTERS IN YOUR SCAFFOLD NAMES!

I will only use blastn, blastx, tblastx, repeatmasker, exonerate, snap, gmhmme3(GeneMark), and augustus. FGENESH costs, so skipped that one.

To ensure proper parsing of the files, make sure that there are no spaces between the equal sign and the path to the files. See my examples below

Set options for the first round of MAKER

This is the maker control file that will be modified for each round of maker. For the first round we will do a gene prediction using Maker’s internal algorithm with the transcripts and proteins, as well as a repeatmasking of the genome using the predicted repeat sequences from RepeatModeler.

Note there are only a few options that I have changed. Particularly:

Why softmask?
Here is an exerpt from the original maker publication. “Soft masking excludes these regions (low complexity repeats) from nucleating BLAST alignments (Korf et al. 2003) but leaves them available for inclusion in annotations, as many protein-coding genes contain runs of low complexity sequence.”

Submit your first round of maker – took 7hrs with 129MB genome

I ran this first maker run on 8 nodes, the output of which is subjected to gff_merge and fasta_merge scripts. These essentially give an initial annotation gff and fasta.

Maker can be finicky. I always receive a perl warning that can be ignored

Major changes are to remove the repeat, est, and protein fasta seqs. Add the new gff that was created from round 1 Add the newly made snap Evidence.

How did I get Augustus evidence?

I already had a trained augustus from running braker on this genome, so adding the species in the augustus program folder was fairly simple. Another tutorial will be created to show how to run braker, which depending on your genome size and amount of data, can take a day to a couple weeks to finish. However, another option is to use the trained augustus from running BUSCO (Benchmarking Universal Single Copy Orthologs) with the –long parameter on your genome. Using a BUSCO training may not be optimal, but it is definitely faster and can be improved upon in subsequent rounds of maker. This tutorial below provides instruction on how to use BUSCO for augustus training.

BUSCO as Augustus training for MAKER

Add the augustus species, which needs to be in the species directory of the augustus you are running. For me it is found here “augustus/3.2.1/config/species/”

Gene models after Round3 maker

Ran snap and augustus for a fourth round of maker.

Gene model characteristics after fourth round of maker

Evaluating the quality of your gene predictions

The maker quality index has nine columns to define the quality of a predicted gene. 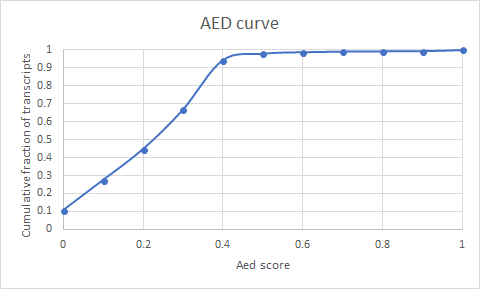